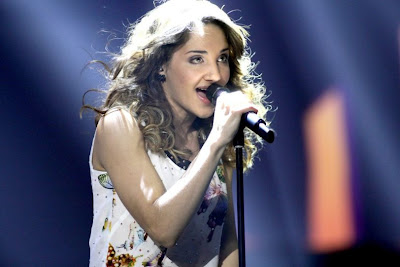 Austria have chosen... Natália Kelly will represent the country in Malmo with Shine! I only managed to catch the last part of the show, because I couldn't find a livestream which worked, damned technology! So what happened tonight?

Natália Kelly stormed to victory with 70 points - she was awesome and such a sweet girl too! Yela came second, she was good, but the performance was beyond average! Why the hell did The Bandaloop come last? Mainly because she looked like a chicken and sounded like one... LOL! It was very underwhelming to be honest! The other two songs were so dull I can't even remember them! Still there was no sign of the Trackshittaz so all is good.

The host made a small mistake when asking Luke Fisher, from ESCXtra, about the UK representative - the host spoke of Kimberly Marsh instead of Kimberly Walsh. Kimberly Marsh would be a great choice in the UK - but what about Mika? And everyone else who has been rumoured for the UK? HAHA... Andreas Grass, Nikola Paryla, Alexander Kahr and Natália herself wrote Shine!

Here are the full results...