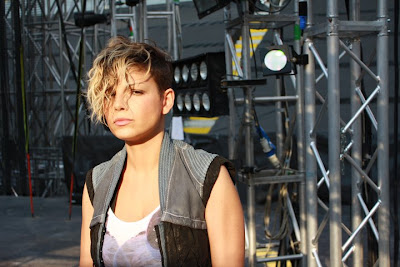 There are several artists throughout Europe which I adore but have never participated in ESC - so I've decided to share my thoughts on them with you all. I'll be doing this throughout the summer and I hope you all enjoy reading these posts. Let's go...

This time I'll be taking a look at the fabulous Emma Marrone. She's participated in Sanremo a few times and even won it in 2012. I think she's one of the best Italians artist out there and it would be awesome if she did participate in Eurovision. Emma shot to fame in 1993 and has remained in the public eye ever since. The 29 year old has released about 12 singles, 2 albums and 1 EP - these have gained the singer 2 Multiplatinum's, 9 Platinum discs and 1 Gold discs. So why is Emma so popular? I guess it's because of her raspy yet powerful voice - you can identify Emma's voice instantly. And I love it!

Her most popular songs are Dimentico Tutto. Amami,  Cercavo Amore, Calore,  Sarò Libera, Io Son Per Te L'Amore and  Non è L'inferno! It was Non è l'inferno she won Sanremo 2012 with - and that song became a big hit in Italy. Apparently RAI asked her whether she would be interested in representing Italy, although she declined the offer - maybe she wasn't ready or maybe she doesn't care for ESC. After Marco Mengoni gave a decent Italian representation this year and regained Italy's faith in the contest, maybe she would be up for it. She's won loads of awards too including the TRL Awards 2012" and the "Kids Choice Awards". One of her most recent singles is a rock song entitled Chimera! That song would be perfect for ESC - and could land Italy a win after all these years.

Oh, I forget to mention her 2011 Sanremo effort with Arriverà - she have a powerful and emotional duet with Moda. Take a look here....


This blogger would love to see Emma represent Italy soon! <3
Posted by Jack Voda at 12:04