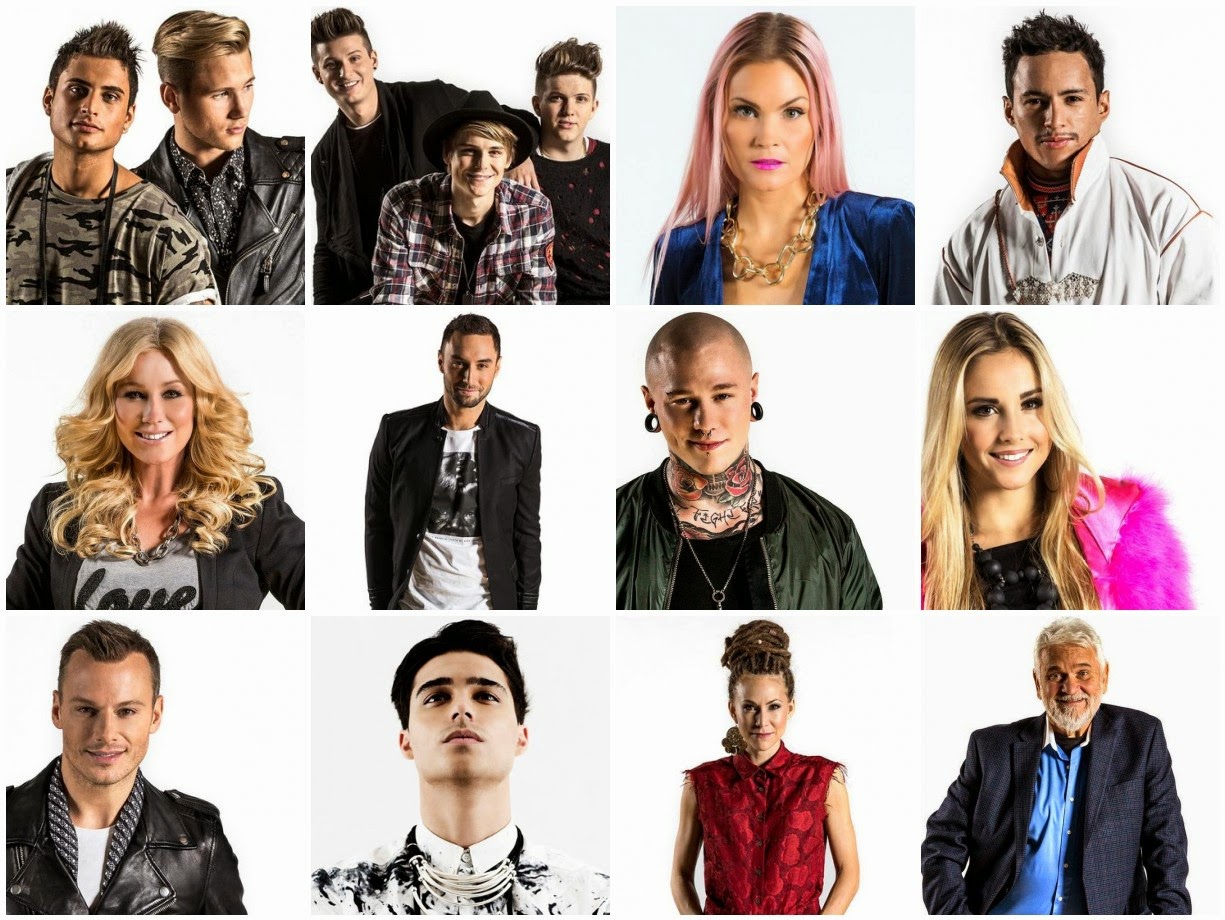 Melodifestivalen will conclude on Saturday. Twelve songs are in the running.. and once again, Melfest doesn't disappoint. Here's what this blogger and my friend Robin, from Sweden, thought of the songs!

Jack: Groupie is a fun and a decent opener - it's very catchy but their song just isn't for me. The performance itself is a bit messy but it does leave a smile on my face. I don't think they will win but they could place well. 6/10

Robin: This is really catchy. Before I heard this song, I was sure that I was going to hate it. I could not have been more wrong. This song makes me really happy, it makes me wanna dance. And Viktor is so cute. It needs in the final, and I am probably going to give this one or two heart votes on Saturday. 7/10

JTR – BUILDING IT UP

Jack: JRT's song is rather average, isn't it? Not terrible, as it's easy to listen to.. but forgettable and dare I say mediocre... A contender for last place. 2/10

Robin: I seriously don't know what they are trying to build up, but I'm really sure that they fail to do it. I don't like the song, I really don't like the random rap part of the song, only one of the boys can sing. I can go on and on making a list about what I dislike about this entry but I won't. I will leave it here. Sorry boys. 0/10

Jack: Love this one! Dinah's performances have been constantly strong and the song is so catchy. Defiantly would make a decent Swedish entry however I can't see them opting for this.. Prove me wrong Sweden, select this little cracker! :-) 9/10

Robin: When I first heard this song, I couldn't stand it. I thought that Dinah had a middle age crisis or something. But then I actually started to like it more and more. It's not the best song. Not the second or even third best song this year. But it's not that bad. Although, her voice is kind of bad at parts of the song. 6/10

Jack: I didn't like this much to start with but Jon's song has grown on me. I don't think Sweden has ever sent a song like this - so it would be an interesting and a daring choice... A joik song in Eurovision might not work and even though he isn't my favourite, I wouldn't be disappointed if he was victorious on Saturday. 7/10

Robin: This is magical. I had goosebumps the first time I heard this song. I like that it's something different. Something that we are not used to hear in Melodifestivalen. The staging is simple and perfect. I'm not going to be surprised if this is going to make it to top five on Saturday. I wouldn't mind to send it to Vienna either. Go Jon Henrik. 8/10

Jack: Hmm, I want to like Jessica's entry however it somehow leaves me a bit cold. Nothing exciting about this one but it's pleasant. 5/10

Robin: I think that this entry is a little bit underrated. No one is talking about it and if they do, they are talking bad about it. Poor Jessica. I like this song. I am a ballad guy and this is a typical ballad. Although she is a little bit too perfect. She stands there in her golden dress, in her blonde hair with the wind machine smiling. Like she have no problems at all. I can see why that is annoying people. 6/10

Jack: Måns is my favourite for sure! If chosen, I think Sweden are going to overtake Estonia and Italy in the odds and they will be the ones to beat in Vienna! I love Heroes so much!!! The staging is brilliant and the song could easily be a hit here in the UK. Will he be chosen? I think it's the obvious choice but who knows... 10/10 from me!

Robin: This is really not what I expected from him. Actually this is way better than I expected. I liked it from the first tone in the intro. The staging is perfect. I love the small snowmans. I think this could be the winner even though it's not my personal favorite. And I really wouldn't mind. 9/10

Jack: What can I say? I like him but I expected better. His entry last year was so much better. I don't think he's going to be heading to Vienna...  and there's too much happening on stage! 4/10

Robin: I like this. It's a good song and an okay show. But he do not sing that well live. Unfortunatley. It's nothing really special, and I don't think it's going to do that great in the final either. 5/10

Jack: Many people are comparing Isa's song to Ace Wilder's Busy Doin' Nothin' - I do see the resemblance but I think her look and performance are more similar to Ace's effort than the song itself. Sweden has better songs so I can't see her winning but maybe she will do well on the night. It's very catchy! 6/10

Robin: This is young, this is fresh and this is Taylor Swit-ish. It's amazing. I can't believe that she is only 16 years old. She owns the stage. And she slays it. I am going to dance to this a lot in the future. 8/10

Jack: For some reason, most people seem to love this song yet I find it completely boring and repetitive. Please don't send this Sweden! One of my least favourites.... 3/10

Robin: This is a typical schlager song. Kind of old-fashioned, you've heard it before. I adore Magnus, but this really is nothing special to me. I was disappointed at first, but i've slightly learned to like the song only because it's Magnus. 4/10

Jack: Eric returns with a fantastic entry. I didn't think I would like this song, as I hated his 2011 effort, but I do like it. I can't help it. The instrumental includes a saxaphone during the chorus - LOVE THAT! He has a massive fanbase and a great draw.. A winner? I wouldn't rule it out. Top three for sure. 8/10

Robin: This is up tempo. We need up tempo songs in Eurovision. But I am really not a fan of this. It's a decent song. And the show is okay, but it's something that makes me dislike this and I can't really put my finger on what it is. I don't want us to send this to Vienna. 3/10

Jack: Mariette would stand out in any other yet although we do have several songs similar to Don't Stop Believing already chosen for Vienna. I can't see her winning but what do I know.. It's a fantastic song, she performs it brilliantly and I hope achieve a high position on Saturday! 8/10

Robin: This is my personal favorite of the whole Melodifestivalen. I love everything about this. The song is simply amazing. Mariette have a killer voice and she knows how to use it. It's so dark and mysterious, like she is some kind of vampire warrior or a witch that's putting a spell on us or something. It's pure perfection. 10/10

Jack: Well it's certainly interesting. Not my favourite but some people will like it. I just find it a bit boring and dated... but hey, anything can happen on Saturday. 2/10

Robin: This is... something. Like the kind of music my grandparents use to listen to. Still it's kind of catchy and I kind of sing along to it, which is embarrassing. 3/10

Here are our rankings...

Tack så mycket Robin for helping me out with these receives! :-)