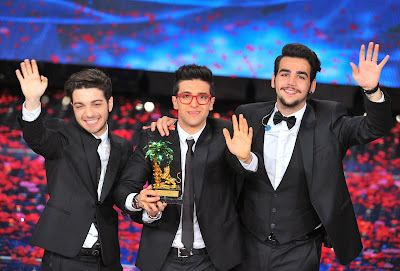 Il Volo are an operatic pop trio consisting of tenors Piero Barone and Ignazio Boschetto, and baritone Gianluca Ginoble. They're among the favourites to win Eurovision with both the bookies and the fans. But is it just hype? Will this type of music really appeal to the masses? Here are our thoughts...

Ana: I’ll start saying that these three boys have amazing voices but I don’t like “Popopera”, I don’t like the song, I don’t like their performance and I don’t like the fact that they're young boys singing old men songs. Maybe I’d like them if we were in 2005 and they were older but nowadays this is so dated! I’d be very disappointed if they won. 4/10

Ilkar: This is what Eurovision is all about: a country represented by a song that represents its musical culture and heritage and identifies as such with first seconds, sung in its own language and being a megahit in its own market. This should win in Vienna for these merits only and bring some sense back to this competitions where countries are represented by singers from one country, writers from another, producers from third and sung in a language other than people of the country speak. Don't the broadcasters have any national pride left?! Popopera genre is sung all over the world but no one does it better than Italians themselves (step back Il Divo, Il Volo is here now) and this song is perfection in its own genre. I fell in love with it with the first hearing. 10/10

Jack: Italy never disappoints. Since their grand return in 2011, they have continually sent awesome songs. Il Volo are great and I do think they're going to win. Even though Grande Amore isn't my personal favourtie, I do still really like it. They would be worthy winners for sure. Of course there's a chance it will fail on the night and do a France 2011 but I somehow don't think that'll happen with these guys. Rome 2016? 8.5/10

Jess: From the moment I heard Grande Amore I fell in love with it! Il Volo have such incredible voices and the song is just so amazing! 9/10

John: This I reckon will garner a lot of favour with worldwide audiences. A ballad that is much closer to popular than to "popera" , it consolidates Italy's reputation as a country to watch out for at Eurovision. It could well do the business in my view. 9/10