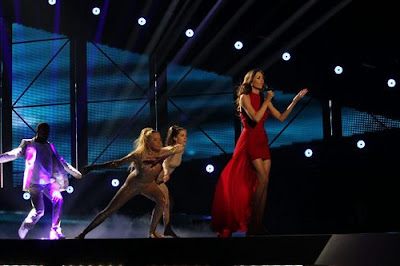 OK, maybe not Kate herself but the songwriters! I'm Not Alone has been online since 2011 apparently! According to eurovisionary the song has been available to download under a totally different name... OMG!

The songwriter(s) of I'm Not Alone didn't know the rules - which is a surprise as they wrote the Irish entry in 2011 and the Danish in 2009. This is an easy mistake but it does show that nothing is private these days as we have the internet... Eurosong.dk commented on the matter, saying...


"This is yet another example of how it in modern times is impossible to avoid the songs appearing on the internet. We have changed the rules in Denmark and we also got EBU to do the same thing. In every case we now evaluate if the song have had a significantly advantage of being available or not. I haven't looked closely into the Kate Hall-case, but I believe she might have been allowed to participate anyway"

Thank god she didn't win, could you image the drama?