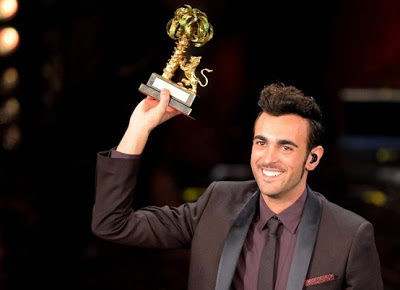 The beautiful L'essenziale is topping the Italian download charts and is getting maximum airplay after winning Sanremo last week! However, something else caught my attention too...

An English version has been released, and it's been trimmed to only three minutes - is this a sign? It would be great to see L'essenziale in Malmo as this year's contest is lacking class. We should know the Italian entry in March and it's possibly going to be this one, Marco will do a fine job with any song so I'm not worried.

Other stars from Sanremo 2013 have also entered the charts, including Chiara and Moda! Something else interesting... His album will be released March 18th, which is the same day all songs must be sent to the EBU and when the delegations meet in Malmo! The Italian song released that day?

L'essenziale has already gathered over one million views on Vevo...