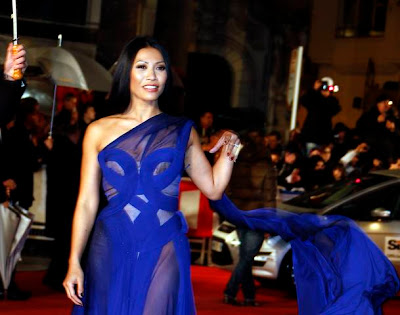 The poor woman who received 0 points from the public in Baku is now a judge on X-Factor Indonesia!

Let's remember she is actually Indonesian and not French, she just represented them with Echo (You and I) last year. The first episode in Indonesia was watched by a 30.3% off all the Indonesians watching TV at that time when aired, which is a massive increase from last year's ratings. RCTI speaks of "Anggun's effect" to the show and hopes the singer will help the show become one of the most watched ever in Indonesia after a really popular show in 2009, which boasted a local share of 44%!

Anggun is joined on the X Factor panel with Ahmad Dhani, Rossa and Bebi Romeo, who are all regarded as "local stars"! In my opinion, Echo (You and I) was the wrong song for her but no way did she deserve 22nd... She plans a huge comeback towards the end of the year, but for now see her live in Belgium!


A few months ago Anggun gave an exclusive interview to the BBC about her childhood, music inspirations and of course ESC!