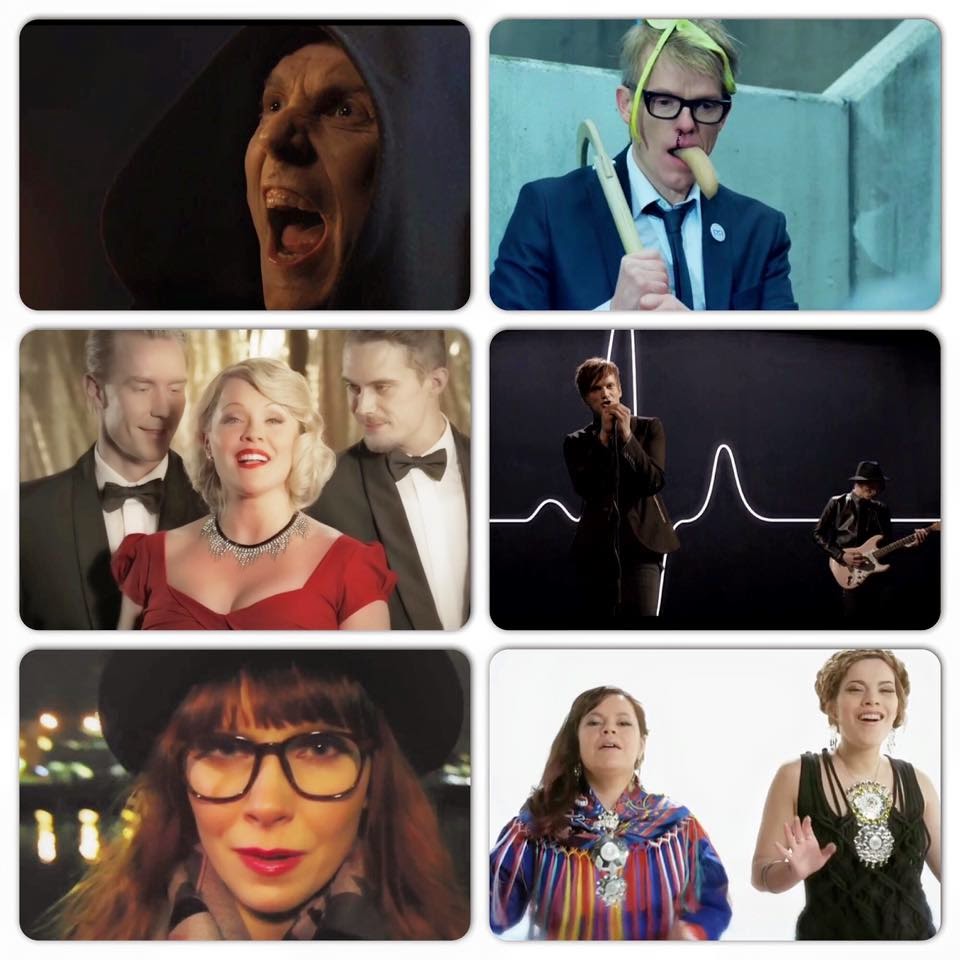 Enjoy the final part of mine and Blogilkar's series where we have reviewed the Finnish hopefuls. The the winner of UMK 2015 come from this semi final? Maybe.....

Angelo de Nile - All for Victory

Jack - Angelo de Nile's song is rather dramatic but boring at the same time, if that's possible. It wouldn't sound out of place in a theatre production but this isn't the theatre.. I don't think the song is good enough to win the Finnish ticket to Eurovision however he could squeeze through to the final, if he performs it amazingly.  2/5

Blogilkar - With the first hearing I was still kinda excited, he sings (or shouts) well, there's a melody, even if heard a zillion times before. But like other reviewers have already mentioned it's not going anywhere. It's not hardrock enough, it's not pop enough but a not working compromise = dull. Then I also made the mistake of checking his videos on his youtube and his attemps being funny (I suppose) are just a bit pathetic and not funny. If you have created this mysterious alias, stick to it in a proper way. Don't be an unfunny joke. This is a wasted opportunity 2/5

Jack - Now I can completely understand that some people won't like this but I think it's cute. The video-clip is hilarious, weird and intriguing. I can't understand word and I know the song sounds rather dated although I do like it. I can't help myself but like it. I don't expect him to qualify, sadly. 4/5

Blogilkar - In some weird way I like this. The lyrics are funny and the song itself so idiotic (in a good way) I can't but listen and smile and hum along. This said, this could become a local hit but would propably never work in Eurovision. "This drink is called bay of tears and it is to be enjoued alone....." as the lyrics go.... 4/5

Jack - Bon voyage somehow reminds me of Norway's entry in 2007 and we all know what happened there. A non qualification in Eurovision. I fear Finland would have the same fate if they sent this song to Vienna. 2/5

Blogilkar - I have been exposed to this style of music all my life. As a youngster I used to hate it, now as a bit older and less critical I kinda like it in the right place and at the right time. And this song in its genre is perfect, very catchy and full of good mood, sung well. I just don't think Eurovision is the right place for it. I wish her a big local hit with this that will be played all summer all over Finland, but Vienna? No. Therefor only 3/5

Jack - Järjestyshäiriö's entry is good but it isn't amazing. Hmm.. I do personally like the song however it isn't a winner. I just cannot see people picking up the phone to vote for this. The problem is that the song doesn't stick in you head after listening to it, and if the Finnish people have the same problem.. they won't vote. A borderline qualifier. But it isn't a bad song at all, just not very memorable. 3/5

Blogilkar - With first hearing I kinda liked this, the second and third left me cold. Not bad at all, but not really good either. Indeed something that would sound nice while driving a car but hitting it home in Eurovision in Vienna? I don't think so. Just a bit boring, isn't it? 2/5

Jack - I think this song is fabulous. It has a great beat and I really hope she will do well. Ida deserves to qualify for the final - I'm looking forward to seeing her perform it live. Loving the EDM vibe as well. I don't think she will win but she will make the final. I hope! 4/5

Blogilkar - In theory this could be great. Nice voice, good sound and arrangement. Pop at its best. But everytime the song gets going and gears up the beat it stops after awhile and nothing really comes out of it. Like the EDM vibe was only there to tease us a bit.... Annoying. I would take the pieces, tear them apart and rebuild the whole song.... 3/5

Jack - Stunning. Hold Your Colours has a beautiful message and I personally would to see Solju represent Finland.. but I don't think it will happen. If they perform it well, they might make the top three. You never really know what will happen until the songs are performed live. Some songs will become a hot mess and others will blossom. Solju's entry is within my top five and I really hope they perform it beautifully, because it's a excellent song. 4/5

Blogilkar - I love the idea. A little bit Sami exotism mixed with modern music, interesting performers, fancy look and styling, absolutely stunning art work... The mother-daughter combination representing the old traditional joik and modern music. It has all the ingredients yet fails a little. Maybe it'd need a key change? More underlined joik? Something. All this said, in the end this is one of my top-3 favorites, right up there with a bold techno opera and sugary boybandpop. I can only hope those three would be in top-3 in the end, too...  4/5


A massive kiitos to Blogilkar for helping me out with these reviews! And a massive thank you to all you guys for taking the time to read 'em! :-)
Posted by Jack Voda at 18:27