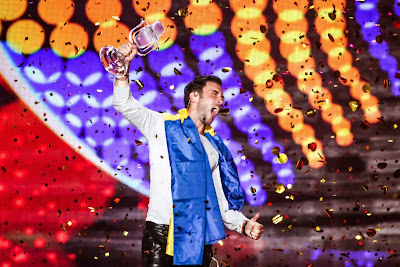 Måns Zelmerlöw won the 60th Eurovision Song Contest last night with a very impressive 365 points. Russia and Italy came 2nd and 3rd respectively. Throughout the majority of the voting, Russia's Polina was leading. This blogger would've loved to have seen Polina win. Yeah, it would've caused problems but I just adored her and the song... Her performance was one that touched me. She did a beautiful job. I wouldn't say I disliked the Italian song but I didn't want them to win. However Il Volo did win the televote it seems but the juries only placed them 6th. Hmm.. No doubt this will raise the question - do we need juries?

The Makemakes and Ann Sophie both got the dreaded nil points. Underserved in both cases but especially for Germany.. That song deserved so much better! Don't even get me started on Edurne's placing! Jaja!! Her performance was flawless both visually and vocally but it could've been worse. Electro Velvet only managed 24th. The irony is that I'm rather chuffed with this. We did better than France, Germany and Austria.. even though we didn't really deserve to. What else can one say about last night's results? I'm delighted for Belgium and Latvia. Both countries who rarely do well in the contest but did last night as they sent daring and interesting entries. I think Serbia were a bit overrated. France and Romania a bit underrated. Georgia managed 11th place, which is more than respectable, however Nina has said that she's disappointed. Azerbaijan came 12th. Shocked. Maybe the dancers were too much? Maybe. And Elhaida was 17th. Could've been worse.. I'm proud of her. The Aussies did very well though, didn't they? Now let's wait to see if the EBU invites them back.. I wouldn't complain if they did. The full results can be found here: 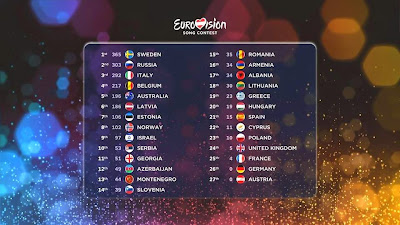 As expected, Russia and Sweden won their semi finals. Latvia came 2nd in their semi final. Awesome stuff! Love Injected was brilliant!  Azerbaijan was 10th in the semi final and Malta was 11th. Poor Amber. Switzerland came last - how? Not the greatest song but Melanie deserved more than 4 points.. San Marino was 2nd to last. Czech Republic came 13th. And they would've qualified if it was 100% televote. Oh well. Maybe next year? In the first semi final, Albania just scrapped though and Moldova - yes, Moldova - came 11th. Eeeeek! I would've been so mad if Elhaida lost out to Moldova. Finland came last, but would've made the final with 100% televoting. Macedonia was last with the televote but did manage 15th overall. Sigh. How did Estonia come 10th with the juries in the semi? San Marino's jury even ranked them last. The juries from Montenegro and Macedonia "have been excluded after consultation of PwC, the contest's independent voting observer, and upon the decision of the Executive Supervisor and the Chairman of the Reference Group." Aka something dodgy is going on there....

Overall, it was a fantastic contest once again. Many awesome songs. There were some technical problems during the voting though.. Also correct me if I'm wrong, but is Russia's entry the only one to exceed 300 points and not win? Conchita's performances were excellent and my favourite moment of the contest was this... words cannot describe how beautiful it is! And people boo her?


See y'all in Sweden next year if my bank balance allows. What's another year....

Photos from Eurovision.tv
Posted by Jack Voda at 13:13