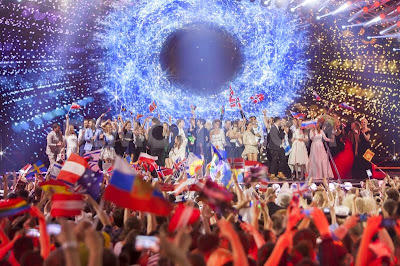 Twenty countries have managed to qualify through the semi finals for tomorrow nights big grand final. I have loved both shows even if I'm not 100% happy with the results.. We're always going to have some great songs that won't make it.. Find out what this blogger thought about the shows and the week so far below:

SEMI FINAL ONE
The first semi final was amazing! Albania made it, Russia made it.. Georgia made it! So did Estonia, Greece, Belgium... all amazing songs. I think Russia won this semi final and I think 10th place would've been either Hungary or Serbia. I'm a little shocked Hungary made it through but pleased. Boggie's performance brought a tear to my eye. Very touching. Armenia's entry could've been a disaster live but Genealogy impressed me. Moving away from the songs, the hosts are pretty good although not very memorable.. Does this make sense? I love Conchita hosting the green room! She's a natural :) and I also love it when the participants walk from the green room onto the stage during the opening.. That's a lovely touch. Talking of Conchita, this photo is beautiful! Love it! 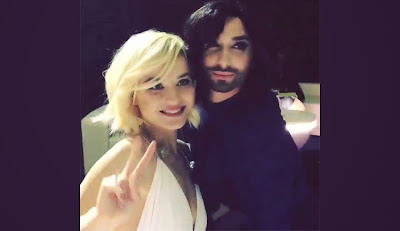 Overall I was impressed with the results. My biggest disappointment was The Netherlands not qualifying though... Why ay ay ay didn't they make it? I'm also sad that we won't see Macedonia in the final. Daniel performed brilliantly and I now fear we may not see a Macedonian entry in next years contest... wasn't they close to withdrawing last year? Finland not making it was a shock. It wasn't my favourtie song - far from it - but I thought PKN deserved it.. Moldova, Denmark and Belarus deserved what they got. I got 7/10 right. I thought Denmark, Finland and The Netherlands wouldn't make it. Unfortunately I have read some comments saying Elhaida was vocally poor. I don't agree. She smashed it. I want Albania to be top ten but whether she will or not remains to be seen....

SEMI FINAL TWO
Now I was rather upset with some results from last nights semi. Czech Republic, Ireland and Malta all deserved to qualify! I am really sorry to see them miss out. Ireland's Molly is a true star. She's only 16 but her performance last night was one of the best. Also Amber really impressed me. And as for the Czech Republic.. Marta & Václav didn't just deserve the final, but they deserved top ten. Obviously the rest of Europe (and Australia) didn't agree with me. I'd be saddened but not shocked if they quit Eurovision. Even though I didn't think Portugal would make the final, I'm still upset Leonor failed to qualify. I'm not saying that I dislike the Cypriot song but I don't think they deserved to have qualified over some that missed out... but that's they way it goes. John was flawless vocally. I was underwhelmed with Iceland so it was no surprise to see Maria fail although I was a bit surprised about Switzerland's non qualification. San Marino's failure didn't surprise me. I got 9/10. I thought Iceland would make it and Latvia wouldn't. For once I am happy to be wrong!

With regards to the qualifiers, I'm thrilled Latvia and Israel finally qualified after all these years! Sweden, Azerbaijan and Norway are possible winners so it was no surprise to see them make it. I was a bit confused with the Azeri dancers are first but they did make the performance memorable. I hope Elnur won't flop like Dilara. Lithuania's performance featured three kisses, including a lesbian and gay kiss. Are Vaidas and Monika a couple? Knez qualified and I think Montenegro could achieve top ten tomorrow night. I think Sweden won this semi. 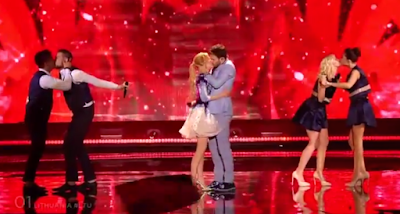 DRAMA!
Even though nothing is official, it seems the EBU are going to allow Australia to participate next year too and the year after.. I don't mind but this will do doubt get some people raging IF it turns out to be true. China have sent a delegation to Vienna and they're broadcasting it too - maybe we'll see them debut one year? A Moroccan delegation are also in Vienna it seems. Is this the end of EUROvision? Personally, I'd love to see as many countries as possible compete. One could argue Israel, Azerbaijan and Cyprus aren't European countries yet they're allowed to compete..

Elsewhere Michele from San Marino threw some shade in Måns's direction although did later say he was joking. Hmmm.. 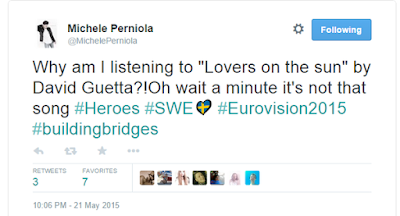 Apparently fake cheers will be used tomorrow after Russia's performance. I am not in Vienna so I don't know if it's true or not although I'm upset if it is. As much as I hate to see booing in Eurovision, the crowd still have a right to express how they feel. It's freedom of speech. I was so sad to see Dima booed in London although if that's how the masses feel. fine. Even though I don't agree with booing an act - I do agree with freedom of speech. If Polina wins - and it's very possible - expect some more controversy! Stay tuned for a special preview of the grand final!
Posted by Jack Voda at 17:50