REVIEWING THE CLASS OF 2015: UNITED KINGDOM! 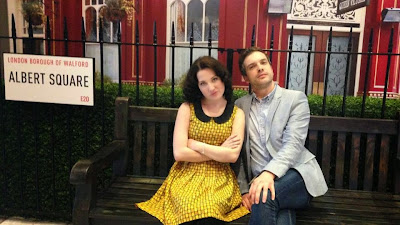 It's the last in the series... did we save the best to last? ;-) Electro Velvet were internally chosen to represent the UK back in March and I think it's fair to say they received a mixed reaction. But their song is uptempo, fun and different. Isn't it? Will the UK do surprisingly well?

Ana: “Different” and “Risky” are the correct words to describe this entry. I can see it in the top 10 but I can also see it in the bottom. Maybe, I miss a well defined and catchy chorus and a more amazing final. The only one sure thing about UK’s entry is that the result is totally unpredictable. 5/10

Ilkar: Like Israel this song has improved a lot after further listening after the initial ”oh, no!” reaction. Yet I think his vocals are very flat and she's a bit annoying but who knows how they will perform live. Maybe this is just an act. The video works, and the playing with their roles but how it will come across live? Time will tell. All in all this song could have been in Valentina Monetta's album (they have even borrowed her ball lamp!), only that she would have sung it better. This can go either way, among the last or surprisingly doing better than any UK entry for years. But then, it will be heard only once.... 7.5/10

Jack: Meh. I appreciate the effort her (going for something fresh, something that will stand out) but the song just isn't doing it for me. I can't hide by disappointment with the British entry. Although I was lucky enough to see them perform it live and they were pretty good. Bianca is defiantly better than Alex imo. Also when they perform, the chemistry isn't there. Some people seem to think they can win.. I personally think that's delusional. I'll be happy if the UK doesn't finish 27th. 3/10

Jess: At first I was a little shocked because I wasn't expecting to see a song like this represent the UK, however around 20 seconds in I really started to like the song. And I have been in love with it ever since! 7/10

John: Strictly in the mould of 1920's swing, the song makes an attempt to modernise the sounds from that era and bring them into the 21st. century.Sadly it doesn't work and the whole exercise amounts to an effort that singularly lacks originality and quickly becomes tiresome. 4/10