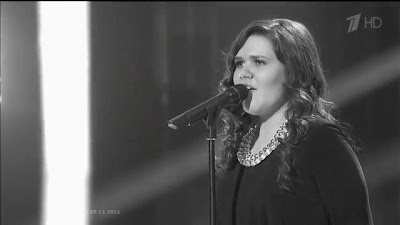 Dina Garipova has been chosen internally to represent Russia in Malmo! She won The Voice Russia where one million Russians voted for her - so she has support in her home country...

The 22 year old will sing What If in Malmo which has been composed by Swedish Gabriel Alares and Joakim Björnberg along with a Russian musician Leonid Gutkin! She is an amazing singer and I hope the song will show that, I'm sure it will - it sounds like What If going to be a ballad but who knows? Yurij Aksyuta, from the Russian broadcaster commented...

"The singer’s choice was obvious and quite logical. We have chosen Dina internally but actually it was a public choice. The Russian TV viewers voted for the winner of The Voice and Dina alone got nearly one million of votes!"

The entry should be released soon, likely to be next week! But for now, check out some of Dina's covers including Qele-Qele...