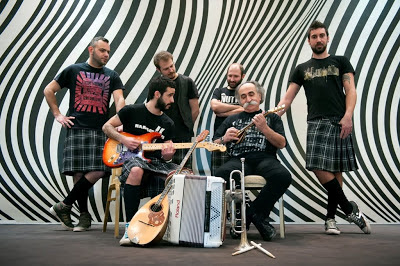 Koza Mostra ft. Agathonas Iakovidis will fly the Greek flag in Malmo, I'm satisfied with this! I wanted Aggeliki Iliadi but apparently she is really unpopular in Greece so it's not a shock she didn't win...

I can see this doing very well in Malmo, it could be seen as a novelty act but it's in Greek and traditional - which is not a joke at all, it's pure awesomeness! Koza's masterpiece certainly divides opinion, just like the German entry but who cares? - I didn't like it when released but it has grown on me and now I class it as one of my favourites! Alex Leon ft. Giorgina certainly put on a show, she had problems with her ear piece and therefore sounded really shaky - Angel is a weird song but it so works, it has an impact. Thomai was nice, bland but nice!

I would've been happy with any of these winning and I think the Greeks have chosen well, again! The show was wonderful, the standard was really high (unlike previous Greek NF's...).

The real highlight of  tonight was Rulsana - she was utterly amazing! Oh, and when Alexander Rybak was speaking Greek he said he wants to play with Greek children, an innocent statement but you can image how everyone took that! LOL! I can see this reaching Top 10 for Greece, it's catchy and unique!