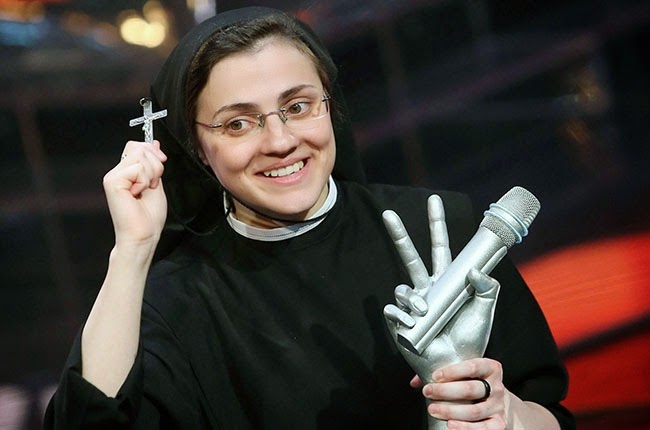 Sister Cristina Scuccia, a 25-year-old Sicilian nun, won The Voice of Italy last night. The singing nun has naturally received a lot of attention and her audition has clocked over 51 million hits on YouTube. She won the public vote with a truly overwhelming 62%. Following her victory, the talented nun stated:


"The last word of thanks, the most important, goes of course to him in heaven," she said, moments before. "And my dream is to recite a Padre Nostro together… I want Jesus to enter into this."

Unfortunately, she didn't win over all Italians. Emma Marrone said Cristina Scuccia's win was an insult to showbusiness as she isn't talented enough. Harsh! J-Ax, Cristina’s coach, tweeted this photograph. The caption says Look, this is how you do showmusiness. Some people say she could go on to represent Italy in Eurovision. So, maybe we'll see the nun fly the Italian flag in Austria? I guess it's unlikely but it would be awesome if it was to happen. (:
Posted by Jack Voda at 20:03