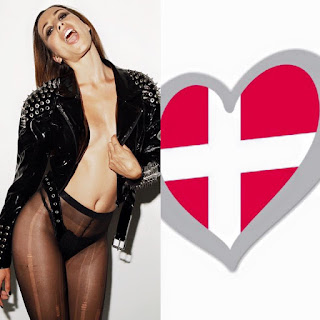 This little series is dedicated to artists from across Europe who I want to see represent their country in Stockholm! And we start with Denmark...

It's probably an obvious choice but I love her. Medina is one of Denmark's biggest artists having sold over 500,000 singles and 130,000 albums. She's won the MTV Europe Music Award for being the Best Danish Act three times and also several other music awards in Denmark. Medina, who has Chilean roots, shot to fame in 2009 with Kun for mig, which was later translated to You And I. The single was released in the UK' too actually and was ranked an A-list at BBC Radio 1. You And I also entered the American Billboard Chart “Hot Dance Airplay” at #6 as well. Germans love her too. “Welcome to Medina” (her first international album) sold 100,000 copies there. So there's some German points for Denmark if they ever do send her! Denmark won the contest in 2000 and 2013 when Sweden hosted Eurovision, with her a hat trick is more than possible :-) Enjoy some more of her music below!


Do you think she would be a good option for the Danes?
Posted by Jack Voda at 16:50