Editorial: Has the UK hit an all time low? 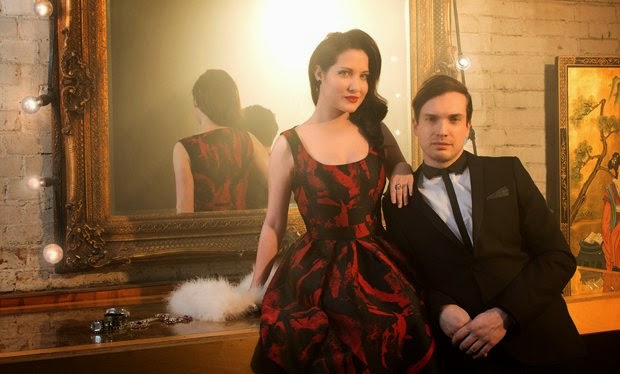 Many fans were left shocked last night when our entry was revealed, mainly for the wrong reasons.

As we all know now, the United Kingdom will be represented by the unknown duo Electro Velvet with a funky retro number. The song has not been received well in the UK - as the British press said 'We know we won't win so we haven't really bothered'. Sigh. I appreciate the BBC's efforts though. It's different - something that Eurovision is lacking so far this year - and they could stand out in Vienna. Maybe. It's also very catchy indeed however there's one problem... the song is just a big pile of nothing. In my opinion of course. It might stand out in Eurovision when performed live but I don't think it'll good enough to reach the top ten or anything. I hope I'm wrong though.

Before yesterday, Electro Velvet were completely unknown here in the United Kingdom. Bianca Nicholas did appear on The Voice UK last year though but was eliminated in the first round so no one really remembers her... Watch her perform below:


Bianca has cystic fibrosis and I've read some comments online saying that they hope she dies before the contest. That is disgusting and so awful!!!! I wasn't going to share that but I thought I would as it shows how horrid and nasty some people can be.  It makes me question humanity. We were in a situation similar last week when Finland selected PKN. If you don't like the song, then fine -  but writing these comments is just terrible.. :-(

Moving on. Alex Larke is a lead singer in a Rolling Stones tribute band. So even more unknown. I believe, and you may not agree with me here, but if it's going to be an internal selection - we should at least send an artist who has had some form of success, within the industry. Someone who people are familiar with. If they won the right to represent the UK through an national final process where the public could vote and have a say, then fair enough. Should the UK select their song through a national final next year? I'd like to see that happen but I am not holding my breath. I don't mean to sound cruel here - but many people also felt the same when Molly was chosen so I'm not only aiming this at Electro Velvet but at the BBC's current approach to Eurovision as a whole.

The Big Five (or the Big Six this year) will all send respectable entries to Vienna. Il Volo are massive in Italy at the moment and their entry has been certificated gold already. Grande Amore has had almost 13 million hits on YouTube and they won Sanremo - one of Italy's biggest and well respected contests. It seems they'll be the ones to beat in Vienna. Meanwhile, Spain are also sending a household name. They may have shopped abroad for the song but Edurne is well known. The French and German singers are a bit more unknown, granted, but at least Ann Sophie won the ticket to Eurovision through an open national final. Even though she wasn't the winner but you know what I mean... If you're going to pick someone internally, opt for someone who the people know. Take a leaf out of The Netherlands's book. They may have gone 100% internal this year but at least people are familiar with their act.

Another problem I have is that they have never performed together live! This surely doesn't bode well, does it? Oh I don't know. It's a rather poor effort. The guys at Wiwibloggs sum it up perfectly.....


For example, Kitty Brucknell isn't a massive name here but people do know her and she loves Eurovision so much. Kitty entered the Swiss selection, went to Moldova too.. she is so dedicated to the contest and would give anything to perform on the Eurovision stage. Couldn't the BBC have given her a shot? Here's what she tweeted yesterday.

My biggest fear is coming 27th place in Vienna. It's not just about the song or the way it was chosen, but the idea of coming 27th place would be hideous and I would be so gutted. And we don't know that they're like live. Will they crumble due to the nerves? Performing in front of 200 million people isn't going to be an easy task. I don't know... I felt a bit upset last night actually. Very underwhelmed indeed. More has to be done in this country to ensure the public can back their Eurovision entry. Molly's song was never going to be a mega hit but people liked it. It was a respectable effort. Children Of The Universe had airtime and reached #23 in the British charts. Not amazing but it's something. I don't think the Brits will support Still In Love With You. This blogger doesn't hate the song - but we could have done better. Much better. The Guardian said:

It feels mean-spirited to criticise Electro Velvet too harshly for this. After all, they didn’t write the song – that was the man who wrote the Jim’ll Fix It theme tune – and they certainly weren’t the ones who let it represent the UK. They’re just jobbing performers with an upsetting lack of taste. Our real scorn should be directed at the people who organise the UK entry; the ones who chose this song and hid their process from view. They’re the reason why we’re going to collectively hide our faces behind a pillow come May, and they deserve to be punished. Surely we can do better than this.

We can do better than this! Last year was awesome. Even though Bonnie and Engelbert didn't exactly set the leader-board on fire, they were known and had professionalism behind them. I do respect Electro Velvet and hope they do the UK proud, that goes without saying, But I think the only way London will get to host Eurovision in 2016 will be if Australia wins.. Oh well. There's always next year! ;-)

Please feel free to comment on your thoughts about the British entry below!
Posted by Jack Voda at 17:33