Latvia: PeR declared the winners! 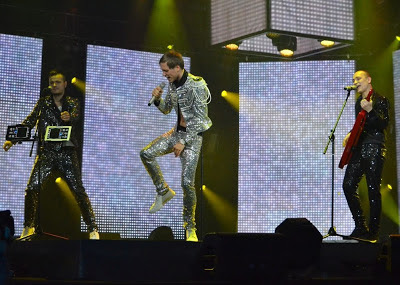 Latvia has decided to send PeR to Malmo with Here We Go, which sounds like it came from a backstreet nightclub twenty years ago. We are not in the 1980's Latvia, jeez...

Here We Go won the televote and jury, surprisingly! I really thought Samanta Tina would make it, unfortunately not but she did make the "Super Final" which was nice and her vocals were even better! Please Explain the Rhythm, aka PeR, are no newcomers to Latvian selections - they have participated several times beforehand! I'm extremely disappointed with Latvia tonight! At least Belgium isn't last on my list now..

Why did they win? I really don't know, they did have a good draw and it is kinda catchy! They also had another song in the selection, Sad Trumpet, which apparently came last! Ott Lepland (Estonia 2012) performed and I swear he gets better and better- utterly amazing! Talking about Estonia, they have had some rather interesting acts tonight's...

It's a shame but hopefully Here We Go will be a grower...