Malta: Amber - "Someone else’s mistake was suffered by us"! 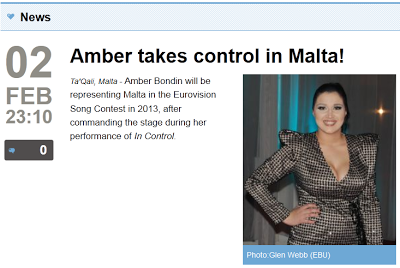 eurovision.tv made a massive mistake last Saturday where they announced Amber had won the Maltese final before the voting even started! She is not very happy about this understandably, because herself and team received negative comments after the false news went viral.

The reason why eurovison.tv, the official ESC website, accidentally released news news was because they had an article prepared incase she did win... Amber published this on her official Facebook page...


After a very long week tonight we had a huge disappointment, not because our performances could have been better, on the contrary, we were very pleased with these however, someone decided to upload an article of what he thought would happen while the televoting was still open. This article insinuated that I had won when the winner was not chosen yet. This led to many complaints backstage and online and several negative comments from viewers some directly to myself and Paul and fleur. Someone else’s mistake was suffered by us who at that moment we're at the stage greenroom and only started learning of this as comments were coming in. Does this person know the damage does at a time when people were still deciding who they wanted to vote for?

The official website apologised and the editor who wrongly published the news has resigned. All the damage a small mistake can make... Here is Amber's performance...