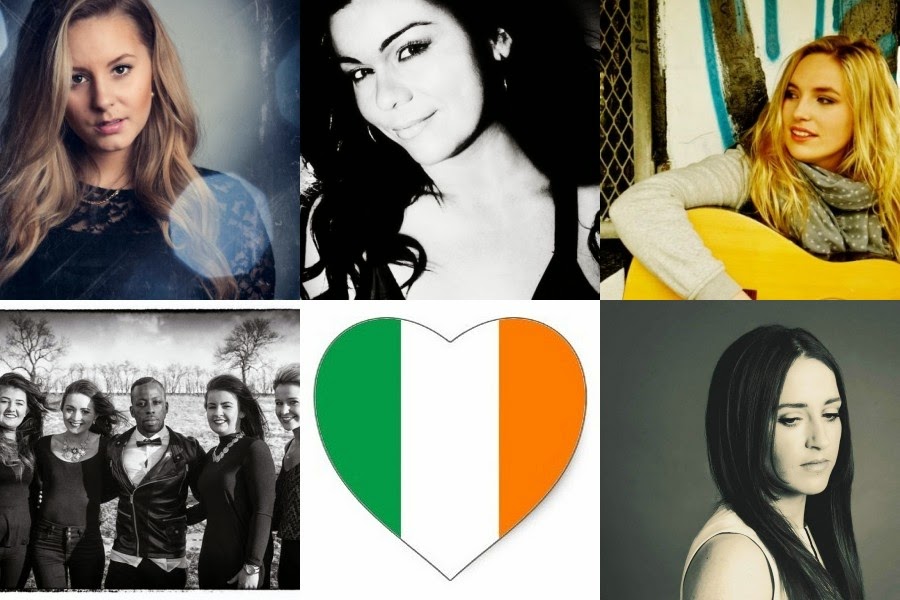 The Irish national final is set to take place this Friday. Five acts are in the running. Two very good friends of mine kindly agreed to review the competing songs with me - John from Ireland and Jess from the UK, who runs partner blog ESC-Starz. Here's what we think!

Jack - There's absolutely nothing I like about this song. The rapping isn't to my taste and the chorus itself is rather awful to be honest.. I'm sure there's a few people who will enjoy and appreciate this song, although this blogger isn't one of them. 1/10

John - Definitely the weakest song in this selection. It really is not suited to Eurovision at all. The song is largely a rap song and we all know how well rap goes down an ESC audience !. Hard to believe it was one of the best five from almost 300 songs submitted. 3.5/10

KAT MAHON - ANYBODY GOT A SHOULDER?

Jack - Charlie McGettigan, who won Eurovision 1994 with Paul Harrington, wrote this song for Kat but that won't be enough to see he win. There's nothing wrong with the song though. It's sweet and she has a good voice etc. but I feel this song will unnoticed on Friday. Frankly, there's stronger songs in the line-up. Not a winner for me but it isn't too bad. 5/10

Jess - When I heard Kat was the favourite I was so excited to hear the song, however it fell a tad short of my expectation and even though she has lovely vocals I am just not a massive fan of the song. 5/10

John - If a ballad is going to qualify it's got to be a really strong song sung by a really strong voice and it must somehow stand out from the other ballads. Kat Mahon's effort is none of these. It just plods along boringly from start to finish. Very slim chance of representing Ireland. 4.5/10

ERIKA SELIN - BREAK ME UP

Jack - Erika's participation in Eurosong has been rather controversial. She's Swedish and apparently Break Me Up was rejected for Melodifestivalen 2015. Meanwhile, the song was composed by a bunch of Swedes and Timoteij are even going to be backing vocalists for her, reports say. Is there anything Irish about this? If you forget all that, the song itself isn't actually too bad but it's not my favourite. Expect more controversy and drama if she is victorious. 7/10

Jess - I love Erika's song so much! I feel that it really stands out and could do really well at Eurovision, I believe her vocals really suit the song and she will do well in the selection. 10/10

John - This is one of two songs that stand a very strong chance of going to Vienna. Great song, catchy tune and well performed by Erica. The only reservation I have is that, being a proud nation, the Irish will most likely vote for "one of their own". This doesn't bode well for this Swedish songstress. 8/10

Jack - Nikki Kavanagh would be my ideal candidate for Ireland this year. Her song, Memories, will require strong vocals live and I'm positive she can pull it off! Last years winner performed at #4 in the running order, as did Ryan Dolan.. is this a good luck charm for Nikki? She was so close to representing Ireland in 2011 - however was pipped to the post by Jedward. Hopefully Nikki will go one better this time :-) 9/10

Jess - Glad to see Nikki return to the selection with such a great song, I really hope she will have the vocals to match live on the night. If Nikki does get picked to represent Ireland I believe she could get a really good place. 8/10

John - My money is on this one to represent Ireland in Austria. Strong song, strong vocals - and, yes, she really can hit those high notes singing live! It's a contemporary sound and it's an original sound - it is not (unlike our 2013 and 2014 entries) a pale imitation of the previous year's winning song. Go Nikki! 9/10

Jack - I feel this song has gone unnoticed by a lot of people. Molly's entry is stunning. I really love this!! If Nikki wasn't to win, then Molly would be my 2nd choice. She is only 16 years old and to write a song like this, just shows how talented she is. I really hope the performance will be just as beautiful and mesmerising, because Playing With Numbers is so gorgeous  - and who knows, maybe the Irish will select this. Maybe... Good luck Molly! 9/10

Jess - Molly has amazing vocals and the song is pretty good, and I believe if she has great vocals on the night she might be one to watch. 7/10

John - I actually like this song very much. Molly is only 16 years old and she co-wrote the song and sings like a seasoned professional. I don't think she will win however but she has a bright future ahead of her and we may be seeing her taking to the ESC stage for Ireland in the very near future. 6.5/10

So that's what we think. But how about you? Who would you like to see Ireland select? Here's a brief recap of the songs:


A massive thank you to John Conway and Jessica Cambridge who kindly reviewed these songs for me!
Posted by Jack Voda at 18:59