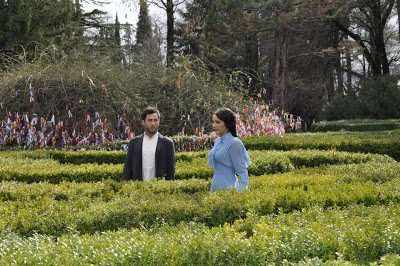 The Georgian entry is going to be made public in the next views days but before that, Sopho and Nodiko are working on the official music video for Waterfall and have released many photographs on their Facebook page...

It looks very classy indeed - they are shooting it at Aleksandre Chavchavadze House-Museum in Tbilisi, the Georgian capital! They used a helicopter to shoot some parts of it and it does look awesome, the song is described as a warm ballad!

Waterfall has been written by Thomas G; son, the guy behind the several ESC entries success including Euphoria and Quédate Conmigo! It's set to be released next week, I am really looking forward to hearing this one! Here is a snippet of the song, which was released last week...