Spain: Ruth Lorenzo speaks out about anorexia, stealing and Eurovision! 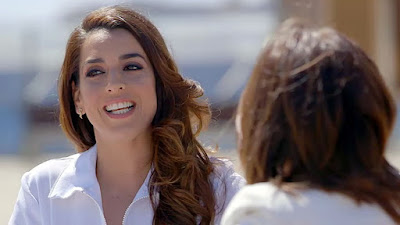 Ruth Lorenzo revealed a whole new side to her on 'Viajando con Chester' last night. The singer opened up about anorexia, stealing and the struggles she's been faced with throughout her life. It's an emotional story...

Throughout her whole life, Ruth has suffered from anorexia which progressed into bulimia, due to personal difficulties. Ruth found out when she was a child that her father wasn't her biological father. Her real father abused her mother and was an alcoholic. She never met him. Throughout her childhood, Ruth suffered alone with bulimia. Her family found out when she was 18 due to a friend telling them. Ruth didn't want them to suffer... "I did not tell anyone that she was anorexic to protect them, I felt very alone" says Ruth. It was triggered by a 'deep wound that triggered everything'.
To this day, people still insult her on Twitter calling her FattyRuLo. Despite her current popularity in Spain, she's still facing a bulimic crisis and is being treated by her brother in law who is a physiotherapist.  When Ruth's mother was pregnant was her, she traveled to France by train to have an abortion although two mormon missionaries told her not to and therefore she didn't go through with it.

She lived in Utah, America, for some years where she found it even harder to 'fit in' as her English was very poor. When she returned to Spain, she worked as a hotel receptionist. In 2008, she successfully auditioned for the The X Factor in the UK even though she didn't have the correct papers which would allow her to live in the UK. Following this, she applied for the papers and got them within 24 hours. Ruth was on the brink of having a massive hit after she signed a £1 million contract although she felt that she wasn't being true to herself and therefore returned the money back to the record label. The single would've been called Spin The Bottle. Ruth didn't want to be transformed into something she wasn't - she didn't want to be a one hit wonder.. The struggle didn't end after achieving 5th place on The X Factor. Sure, more people knew her but Ruth still found it hard to get by. The Murcia born singer lived in London and had to steal food to survive. People would ask for photos whilst she had stolen food in her pockets - such as eggs. She didn't have money despite being known. The message behind Dancing In The Rain is when you're struggling, sometimes you just have to throw caution to the wind and dance like there's no tomorrow. Dance like nothing matters. Dance in the rain. Who cares if you get wet? It doesn't matter. Therefore in 2013, she once again returned to Spain as she was having little success in the United Kingdom and applied to take part in the Spanish selection for Eurovision. Ruth was hardly a household name in Spain prior to the national final and therefore wasn't sure she should participate. People didn't really know her. But Ruth enter as she had nothing to lose - but everything to gain. And as they say, the rest is history... Ruth's now living her dream - despite experiencing some issues - but on the whole, Ruth is in a much better place. Eurovision really helped her both professionally and personally. It's an inspirational story. Following her interview last night, the official video clip of Patito Feo. Patito Feo translates into Ugly Duckling and that's how Ruth felt when she was growing up. Like an ugly duckling. Who knows what the future holds for Ruth? Who knows what the future holds for us? Sure, that sounds cheesy but it's true... I genuinely think Ruth's story is both tragic yet amazing.  Siempre tienen esperanza. You can enjoy the video clip below...


Muchas gracias to my friend, Ana Berdullas, for translating the interview for me :-)
Posted by Jack Voda at 20:36