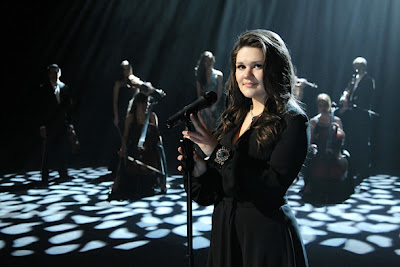 I have decided to take a look at each entry this year, in a lead-up to the contest! There are 39 countries participating this year, all aiming to win in Malmo (well, some don't wanna win!) Turkey, Portugal, Slovakia and Bosnia & Herzegovina decided to withdraw this year, which was a shame, so lets hope they'll decide to return for 2014! I have drawn all the countries randomly and today it's Russia's turn...

Russia selected The Voice winner Dina Garipova to represent the country internally. Her power ballad was released towards the end of February and has been doing really well with the bookmakers. Can see why people think it'll do well. The music video though is horrendous! Talk about cheesy... It's just horrible. Especially at the end when everyone rises to the their feet and starts swaying - I just don't like it. With any luck it'll be nothing like the video-clip in Malmo. Normally Russia stands out and this won't stand out... If Belgium was sending this it'll probably come last - but because it's Russia they will get a top ten result and qualify with ease.

Dina is a fantastic singer! One of Russia's finest... She performed at the "Eurovision in Amsterdam!" concert and was one of the best vocalists that night. If I had to complain about something regarding What If it would be about the lyrics... They are so damn cheesy. Why couldn't she sing in Russian instead, then she could sing what she wanted and it would still sound beautiful. I really want Russia to sing in Russian - it's such a wonderful language. It was written by some Swedes especially for ESC and Dina promises a fantastic performance in May.


What if we all opened our arms? What if we came together as one?


TOMORROW'S HINT - HOPEFULLY SHE WON'T MESS UP THE LYRICS IN MALMO...
Posted by Jack Voda at 11:30