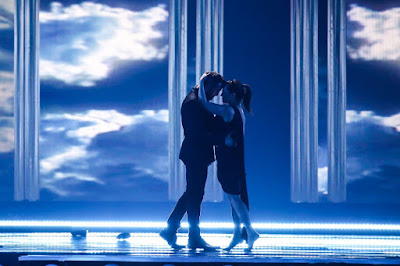 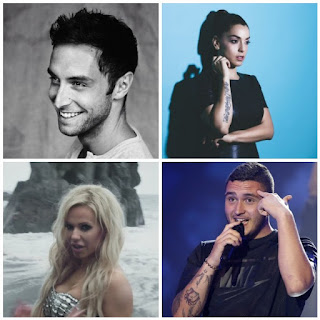 Måns Zelmerlöw, the reigning king of Eurovision, has released a new single. Listen below:

This blogger is in love. Absolutely stunning! Earlier today, Ruth Lorenzo released the official audio of 99 - her latest track. She plans to release a special edition of Planeta Azul in October. It will will feature collaborations with different artists and songs from Planeta Azul in English. 99 will feature on this album.

Will she? Won't she? This is the question we all had regarding Doda's potential participation in Eurovision 2015. In the end, she didn't represent Poland. Obviously. Next year? Maybe. In the meantime, let's enjoy her latest song...

And finally we have some new music from out Israeli golden boy - Nadav Guedj! Great summer vibes here. Summer is not ever yet :-) 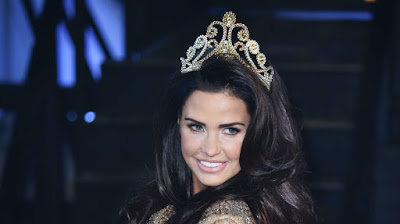 Never underestimate the Pricey!! Katie Price wants to fly the flag for the UK next year. Regarding her possible participation, the glamour model said:


Never say never. I might rectify it. Just for the laugh - we're never going to win it.

This surely isn't the right attitude, is it? I'm sure we won't see her in Stockholm next year - but after the UK's poor showing in Vienna, nothing would surprise me. The winner of Celebrity Big Brother has previously said Eurovision is her only regret. Let's remind ourselves of her unique performance during the 2005 selection. She's not just anybody ;-)

Måns Zelmerlöw and Petra Mede are very likely to host Eurovision 2016, according to Expressen. Sanna Nielson (who said she would've loved the job) is going to host Allsång på Skansen - a very popular summer festival - so maybe this means she's out the the race? Maybe. Who knows. Petra divides the Eurovision fan community but this blogger is a massive fan. I'd be more than happy to see her and Måns host the contest. However we shouldn't rule out Gina Dirawi and Sarah Dawn Finer. Both are also rumoured. Only time will tell.
Posted by Jack Voda at 19:33 No comments:

If you're on Twitter, it would mean the absolute world if you gave me a follow.Naturally, I'll follow back :-) I'm at @EurovisionJack3 and you can see my profile here! Thank you!!
Posted by Jack Voda at 19:05 No comments:

Spain: Marta Sánchez to be chosen for Stockholm? 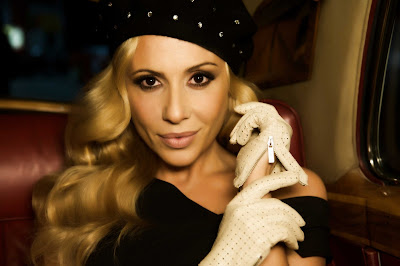 Marta Sánchez was hotly tipped to fly the Spanish flag in Vienna however due to other commitments, it didn't happen and Edurne got the gig. However the Spanish diva has expressed her interest in representing the land of sangria and sun in Sweden next year. Marta spoke to the magazine Diez Minutos where she said:

Question is - will TVE ask her? I would absolutely love to see her on that stage in Stockholm next year. She's brilliant and with the right song, could give Spain their best shot in years. Enjoy some of her music below.. 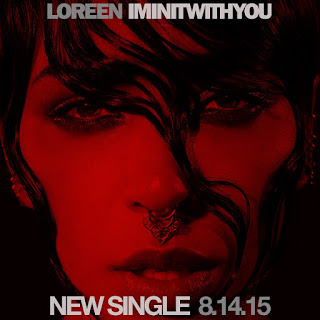 I knew Loreen's new song was going to be good. Everything she does is good but her new single - I'm In It With You - is friggin' awesome!! The official audio was released today (even though it leaked earlier in the week). We should expect an official video-clip soon... Oh, and an album in the autumn. Enjoy :-) 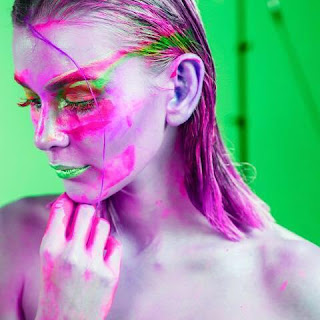 Emmelie de Forest's new single isn't what I expected. I like her. I always have but I'm not loving her new song. Maybe the song will grow on me - but it's both unoriginal and boring. It's a million miles away from her first album. I expected better. Am I being harsh? Listen below: 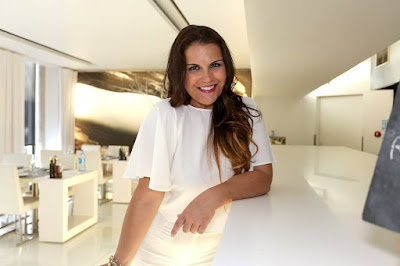 Portugal are probably the unluckiest country in Eurovision. In 48 years of participating, they haven't ever graced the top five let alone win. The Portuguese haven't qualified for the final since 2010 either. Many people are calling for the selection process - Festival da Canção - to be scrapped or revamped as it clearly isn't working. But there's one Portuguesse singer who is being rumoured as a possible participant for Portugal and someone who this blogger thinks would be perfect... Katia Aveiro!

Katia Aveiro is famously Cristiano Ronaldo sisters but is also a singer and has expressed an interest in representing her country in Stockholm! She posted this on Twitter.. 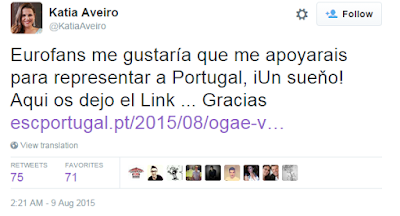 Her music is pretty good actually. Portugal should select her internally, give her an awesome dance song and bang - Portugal are back in the final. Do you think she would be a good choice? Or would the Portuguese be better opting for someone else? Enjoy her latest song below: