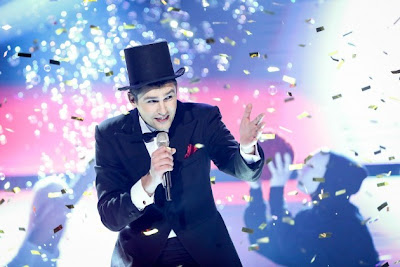 I have decided to take a look at each entry this year, in a lead-up to the contest! There are 39 countries participating this year, all aiming to win in Malmo (well, some don't wanna win!) Turkey, Portugal, Slovakia and Bosnia & Herzegovina decided to withdraw this year, which was a shame, so lets hope they'll decide to return for 2014! I have drawn all the countries randomly and today it's Lithuania's turn...

Lithuania selected their entry on 20th December - and if I'm honest, I wasn't expecting much as it was a weak NF but they selected the best song on offer! And after it got revamped I like it even more. "Eurovizijos“ dainų konkurso nacionalinė atranka" started in October 2012, and lasted two months - one of the longest selections! But the Lithuanians weren't the only country to select their song in December - Belgium, Ukraine, Albania and Switzerland also did! The song Something is a fine song.

I think I was the only one who didn't like Love Is Blind last year so I'm pleased there's a Lithuanian entry I can enjoy, it's been a while! I don't think the country will beat they're 2007 effort - fantastic song! Andrius will not qualify, that's my prediction... Would like to see this in the final though! It's drawn between Montenegro and Belarus - both uptempo songs. Good luck Andrius - you can follow him on Twitter here!


From the Lithuanian final...