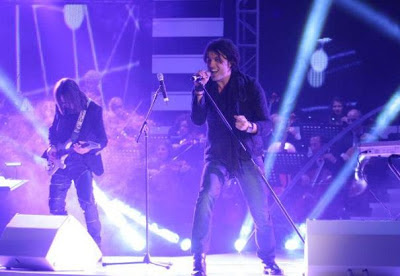 I have decided to take a look at each entry this year, in a lead-up to the contest! There are 39 countries participating this year, all aiming to win in Malmo (well, some don't wanna win!) Turkey, Portugal, Slovakia and Bosnia & Herzegovina decided to withdraw this year, which was a shame, so lets hope they'll decide to return for 2014! I have drawn all the countries randomly and today it's Albania's turn..

The classic Festivali i Këngës was used to select the Albanian entry, like every year. 17 acts battled for the ticket and the rock duo became victorious beating stiff competition from Anjeza Shahini (2004) and the fabulous Kejsi Tola (2009) - her entry has become something of a national final favourite. The whole of Europe expected Kejsi to win, but she just came a respectable forth The thing I don't like about FIK is that the public have no say - the winner is decided by jury alone. Identitet won the selection on 22nd December - which was one day before Ukraine selected the amazing Zlata...

Luckily, the Albanian rock anthem was not translated into English and the revamped version was released in early March. I don't know if this will qualify - I hope it does, but it could just miss out. Would be nice to have some rock in the final - 2007 was one of my favourite ESC years ever, and that's manly because of all the rock songs which were entered! I loved Iceland, Finland, Czech Republic, Montenegro, Estonia...so many good songs that year but that was because Lordi won in 2006. Another thing which makes me uncertain about their qualification is because Albania failed in 2011 with Aruela Gace... Time will tell!


This is the original version, performed in December..